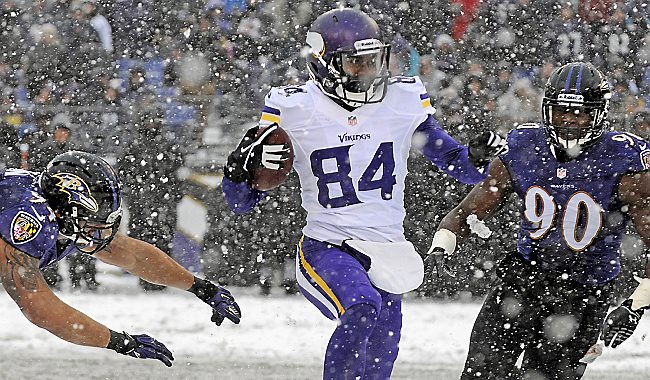 The last time the Vikings played in Baltimore there was a snowstorm during the game and a scoring storm at the end.

It was December 8, 2013 and an abnormal thunderstorm dumped a bunch of white stuff on the field of MT&T Stadium. So it was no surprise that the game was for the most part a defensive fight, with the Ravens leading 7-6 before the Vikings scored a first-minute touchdown in the fourth quarter to take a 12-7 lead. .

Well, that would all change eventually. In the final 2:05 of the game, with the snow no longer falling but the pitch like a sheet of ice, the teams combined to score five touchdowns. The Ravens got the last one on a nine-yard pass from Joe Flacco to Malcolm Brown with four seconds left and won 29-26.

With the Vikings returning to Baltimore for Sunday’s game against the Ravens, memories of their last visit have been rekindled.

“The main thing I remember is that it was one of the few games I played where the snow was so thick,” said offensive coordinator Klint Kubiak, then a quality control assistant. of the Vikings under the direction of head coach Leslie Frazier. â€œIt was a fun game. I know it played out on the wire, and we didn’t.

Vikings special teams coordinator Ryan Ficken was the team’s assistant special teams coach at the time. Wanting to cover all the bases in preparation for Sunday, he recently watched the 2013 game.

Defensive end Everson Griffen is the only Vikings player to have taken part in this game. Safety Harrison Smith was then on the injured reserve with a toe injury and wide receiver Adam Thielen was on the practice squad at the time.

Kubiak recalls wide receiver Greg Jennings “skated and didn’t let the elements hurt too much”. And he remembers then rookie catcher Cordarrelle Patterson “went out and made some huge plays” and “walked across the court a few times.”

Patterson had a big game, catching five passes for 141 yards. And he played a part in the wild end.

The madness started when Flacco threw a one-yard touchdown pass to Dennis Pitta and a two-point conversion pass to Torrey Smith for a 15-12 lead to the Ravens with 2:05 left.

“It was a really good football game,” said John Harbaugh, who was then and remains Baltimore’s head coach. Then all of a sudden the ground looked like an ice rink. All of a sudden our guys are sliding (and) we couldn’t attack. ”

With 1:27 to go, Toby Gerhart scored on a 41-yard touchdown run to give the Vikings a 19-15 lead. But Jacoby Jones returned the ensuing kickoff for 77 yards for a touchdown to give the Ravens a 22-19 lead with 1:16 remaining.

The Vikings have returned. Patterson took a screen pass from Matt Cassell and crossed the field to score on a 79-yard touchdown with 45 seconds left for a 26-22 lead over Minnesota.

Not so fast. Flacco brought the Ravens onto the field, then hit Brown in the back end of the end zone for the win.

â€œFive teams won that day, but we won the last time, and that’s the one that mattered the most,â€ Harbaugh said with a laugh.

Unsurprisingly, at the end of this season, NFL Network named it one of the Top 10 Games of 2013.