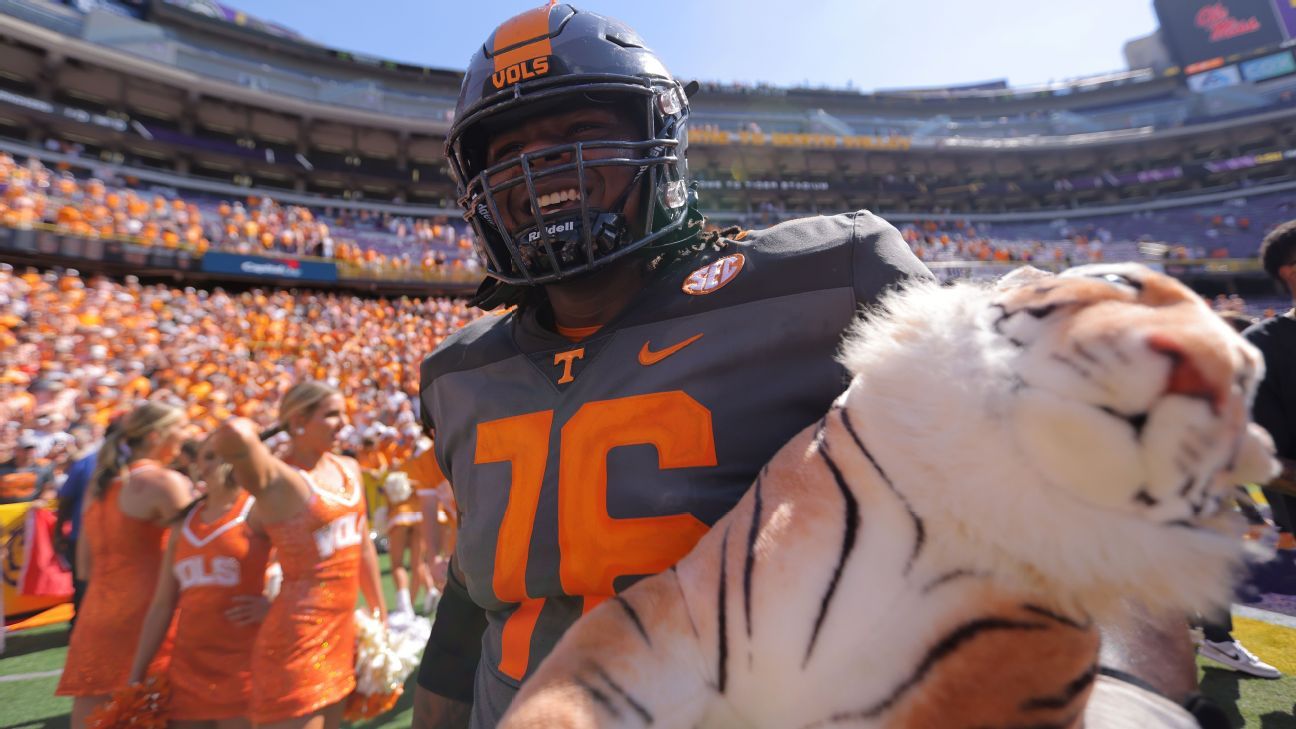 The UCF Knights started things off with a smart burn from the SMU Mustangs Thursday night and the Houston Cougars and San Jose Spartans continued the barbs Friday night. Saturday’s action saw the No. 8 Tennessee Volunteers, Texas Longhorns and Eastern Michigan Eagles celebrate their wins at the expense of their opponents.

Here are some of the best 6 week troll jobs across the college grid:

Tennessee quarterback Hendon Hooker threw for 239 yards and two touchdowns against the LSU Tigers in Baton Rouge, Louisiana. According to ESPN Stats & Information, the Volunteers’ 27-point win is the biggest against an AP-ranked team in the regular season since 1995.

In Louisiana, the suffix “eaux” — as in “Geaux Tigers!” — is popular thanks to its roots in Cajun/French culture. The Vols used it to draw attention to their 5-0 record and troll the Tigers.

Buckeyes quarterback CJ Stroud set the Spartans on fire, finishing with 361 passing yards and six touchdowns. He is the first player in Big Ten history to play three career games with six passing touchdowns. In two starts against Michigan State, Stroud threw more touchdowns (12) than misses (8). With the victory, Ohio State is 6-0 for the fourth time in the last five seasons.

MSU’s mascot is a Spartan, so Ohio State’s mascot Brutus recreated the iconic “This is Sparta” scene from the movie “300” for an exceptional post-game dig.

Saturday was a historic day for Pittsburgh running back Israel Abanikanda. He rushed for 320 yards, breaking the school’s single-game rushing yards record previously held by Tony Dorsett (1975). He added six touchdowns to his stat line, joining LaDanian Tomlinson and Ricky Williams as the only players in current Power 5 programs to rush for more than 300 yards and six scores in the past 25 seasons.

The Panthers were in the mood to sing along after the win, quoting the words to the children’s nursery rhyme “Hokey Pokey” – a savvy joke about the Virginia Tech nickname.

THIS IS WHAT IT’S ABOUT 🎶

It’s the Eagles’ fourth straight win over the Broncos. The team’s Twitter account reminded Western Michigan of the number of days since they defeated rival I-94.

Mississippi State quarterback Will Rogers roasted Arkansas on Saturday, throwing for 395 yards and three touchdowns. The Bulldogs defense gave the Razorbacks trouble all day, forcing them into two turnovers.

After missing three games with a shoulder injury, Longhorns quarterback Quinn Ewers had a day on his return, throwing for a career-high 289 yards and four touchdowns in a 49-point thrashing Sooners. Running back Bijan Robinson rushed for 130 yards and two scores. For Oklahoma, the 49-point loss marked the third-largest margin of loss in program history.

Kevin Durant, a Texas alumnus and Brooklyn Nets superstar, knew it was over for the Sooners before the game was over.

Spartans quarterback Chevan Cordeiro had 339 rushing yards (230 passes and 109 rushing) and four touchdowns to lead his team to a rout of the UNLV Rebels. Cordeiro has had a terrific start to the season, throwing for 1,308 yards, six touchdowns and no interceptions in five games. He also has 186 rushing yards and six scores to start the year.

With 3:30 left in the fourth quarter, the Memphis Tigers had a 32-19 lead over the Cougars and a 99.9% chance of winning, according to ESPN Analytics.

Then chaos ensued in the final minutes, as Houston scored a touchdown to cut the lead to six with 1:17 to go, recovered the ensuing inbound kick, then got the winning score with 18 seconds left to secure the comeback victory. Cougars quarterback Clayton Tune threw two of his three touchdown passes in the final two minutes to bring his team back from a 13-point deficit.

The Cougars took notice of their fourth quarter winning percentage and reacted appropriately after the victory.

The Mustangs held a 13-10 halftime lead, but the Knights took over after the break, scoring an unanswered 31 points in the second half to ride away with the win. UCF quarterback John Rhys Plumlee threw for 316 yards and two touchdowns, both to receiver Ryan O’Keefe. The senior wide receiver finished with six receptions for 116 yards.

The UCF Twitter account used the “Look at our smokevideo featuring alumni Eric Dickerson as inspiration for his clever post-game burn.