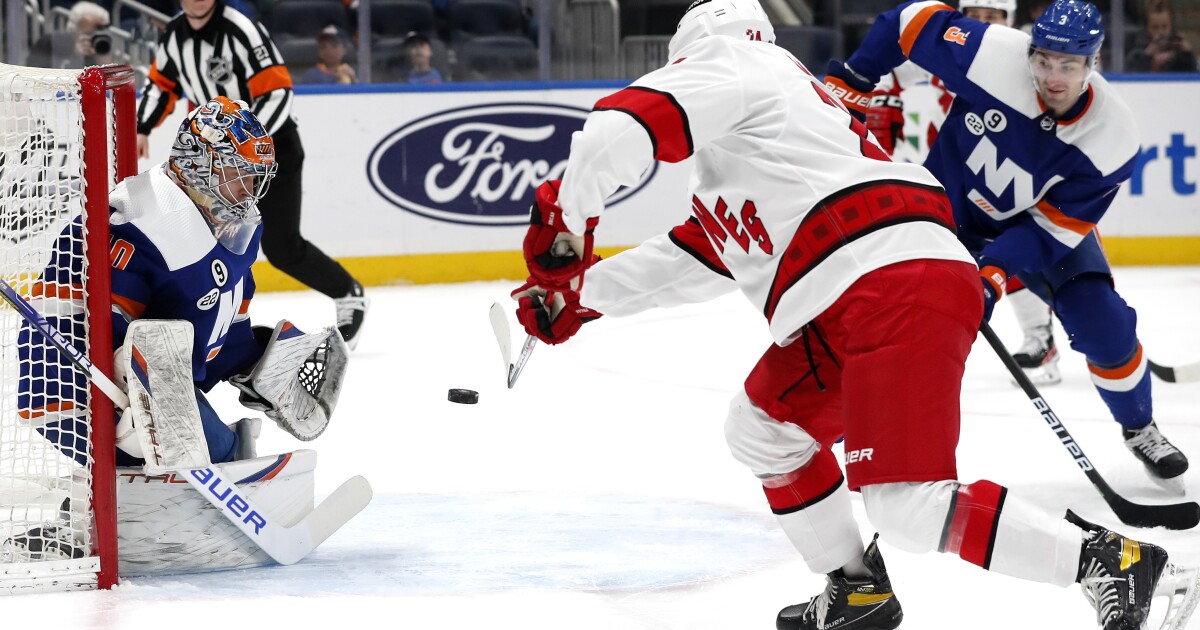 Domi and Hurricanes win 4th in a row to increase lead, top islanders

Max Domi scored the game-clinching goal early in the third period and the Carolina Hurricanes got a rookie goalie assist, solidifying their lead in the Metropolitan Division by beating the New York Islanders 5-2 on Sunday.

The Hurricanes won their fourth straight game and extended their lead over the second-placed New York Rangers to four points. Carolina has two games left, including a visit to Madison Square Garden to face the Rangers on Tuesday night. New York has three more games to play.

Carolina tied franchise records for wins (52) and points (112). Both marks were established in the 2005–06 season, which culminated in the team’s only Stanley Cup championship.

“From day one, it’s been great here,” said Domi, who was acquired by the Hurricanes from the Columbus Blue Jackets last month before the trade deadline. “There is a winning mentality.”

Pyotr Kochetkov made seven saves on eight shots for his second career victory 24 hours after making his NHL debut. He entered the game in relief of Antti Raanta, who made 17 saves on 18 shots before being injured in the second period.

The Hurricanes are now missing their top two goaltenders after Frederik Andersen was injured on April 16.

“What can you do, just keep going,” added Brind’Amour.

Ross Johnston and Ryan Pulock scored for the Islanders, who lost their fifth straight game. Semyon Varlamov made 29 saves on 32 shots.

“They’re definitely one of the best teams in the league,” Islanders forward Matt Martin said. “We just went neck and neck with them.”

Domi gave the Hurricanes a 3-2 lead at 5:40 of the start of the third period, beating Varlamov after Teuvo Teravainen’s pass behind the net found him open in the crease.

“In the third period, we played our game, creating turnovers and playing our style,” Hurricanes forward Jordan Staal said.

“In the third period, I think they upped their game,” Islanders coach Barry Trotz said. “Our game didn’t have the pop it had in the first two periods.”

Stepan opened the scoring on the Hurricanes’ first shot of the game, 2:25 into the first period. The former Ranger stole the puck from Noah Dobson and quickly beat Raanta. It was Stepan’s first goal since March 28.

“He’s a pro,” Brind’Amour said. “Everything we ask him to do, he does. I made him kill penalties. I don’t know if he’s ever killed penalties before. He was key for us.

With Kyle Palmieri in the penalty box for hooking, Jarvis doubled the Hurricanes lead with 8:09 remaining in the first period. After Andrei Svechnikov’s pass found him wide open next to the goal, Jarvis quickly pivoted and shot the puck past Raanta high on the glove side, giving him his third straight game with a goal.

Vincent Trocheck was a healthy forfeit, missing a game for the Hurricanes for the first time this season. Trocheck had registered just two goals and no assists in their last 13 games. Stepan played instead of Trocheck.

New York continued its Alumni Weekend celebration, with Denis Potvin, Bob Nystrom, Bryan Trottier, John Tonelli and Butch Goring among those in attendance for Sunday’s game. They each had their jersey number retired by the Islanders.

Hurricanes: At Rangers on Tuesday.

Things to do for Internet entertainment