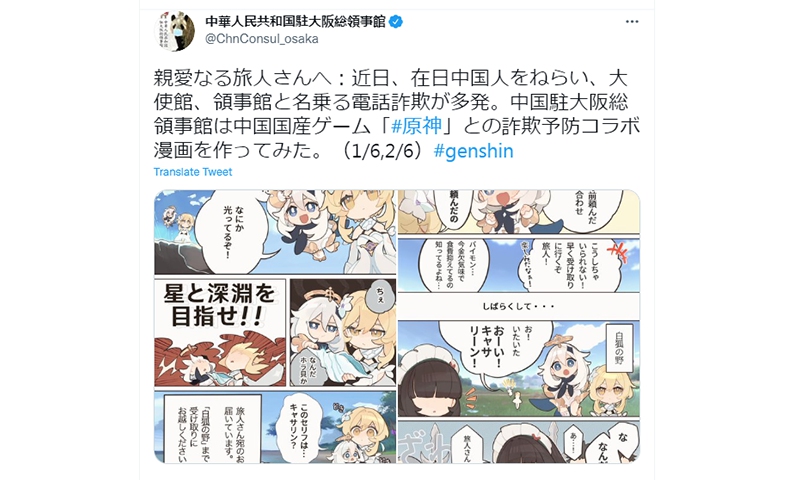 The Chinese Consulate General in Osaka, Japan on Friday posted on Twitter a group of comics featuring characters from the world-popular Chinese video game Genshin Impact to promote anti-fraud awareness in the aftermath of the growing telecommunications fraud in the region.

Comics posted on the consulate’s official Twitter account, which have Chinese and Japanese versions, warn Chinese in Japan to beware of telecommunications fraud.

The comics combine footage straight from the game and a few recent fraud cases. In one comic, the main characters of the games, a pair of twins who travel through the stars and visit different worlds, pick up a conch shell (which acts like a phone) and are summoned to a certain location.

After their arrival, a group of people claiming to be law enforcement accused them of breaking the law and fined them. Not trusting the group, the twins find an excuse to flee and seek help from the real law enforcement in the area. Eventually, the crooks are arrested.

The comics describe one of the methods commonly used in telecommunications fraud, in which crooks pretend to be authorities such as the police and tell people that they are involved in a crime and have to pay for money. money or report personal information.

The idea of â€‹â€‹using comics was praised by internet users overseas. The associated tweets have been liked thousands of times, and many Twitter users, including fans of the video game, praised the consulate staff for their creativity and the adorable comics for their fun and educational nature.

Genshin Impact is an open-world action role-playing game that allows the player to control one of four interchangeable characters in a group. The game had received generally positive reviews, with reviews praising combat and the open world, while others criticized its endgame and shallow monetization model. Released in 2020, the game grossed over $ 2 billion in its first year.

Cooperation with video games and the consulate? also stunned Chinese internet users when it was posted on Sina Weibo by some accounts.

A Beijing-based gamer, 27, told the Global Times that the comics caught her attention at first glance and that she felt they were a much better fraud warning method than some text messages online.

This is not the first time that the consulate has turned to the power of comics for an information and awareness campaign. The Consulate launched a COVID-19-themed comic series in March 2020 on Twitter to showcase the impact of the deadly virus on the human body.

These comics were also well received by netizens, who praised them for turning complex and abstract medical knowledge into a simple and straightforward comic.