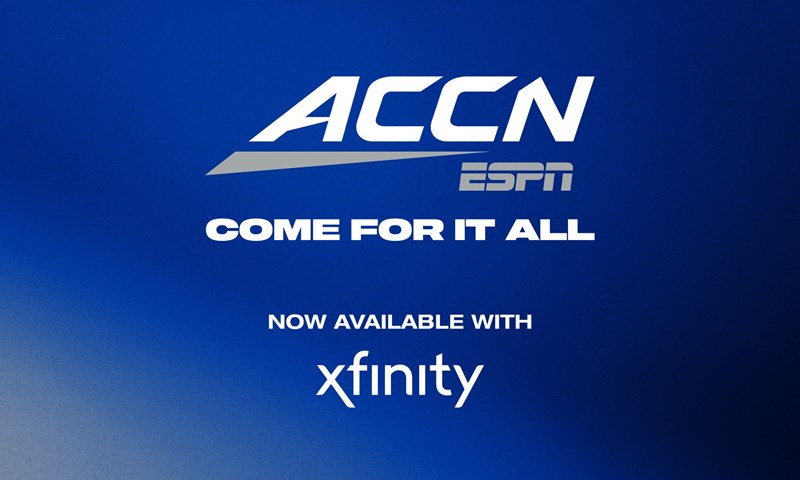 ACCN is available on Xfinity channel 1325 on Digital Starter in ACC footprint states and available in other Comcast markets on Digital Preferred.

Today’s news follows the Announcement of November 30 that Comcast will distribute ACC Network (ACCN) to its Xfinity customers, giving Atlantic Coast Conference fans and followers access to the multiplatform network.

Notably, with the addition of Comcast, ACCN is now fully distributed with all major satellite, telecommunications and digital providers across the country, and available to nearly 90 million homes.

ACCN broadcasts over 500 regular season and tournament games annually in the 27 conference-sponsored sports including football, baseball, softball, field hockey, volleyball, wrestling, men’s and women’s basketball, lacrosse and soccer, as well as additional news and information on shows and original programming. Together, ACCN and its digital platform, ACCNX, combine to present more than 1,500 ACC events each year. The network is a full access pass to nationally competitive events, expert analysis, documentaries, classic games and in-depth features on the premier sports and academic conference of the university athletics.

For more information on ACCN and its availability, please visit www.GetACCN.com.

About the ACC network

Owned and operated by ESPN in partnership with the Atlantic Coast Conference, ACC Network (ACCN) and its digital platform ACCNX is a national 24/7 network dedicated to ACC sports which was launched on August 22, 2019. ACCN broadcasts over 500 regular season and tournament games of the 27 sponsored sports of the conference plus additional news and information programming and original programming. Together, ACCN and its digital platform, ACCNX, combine to present more than 1,500 ACC events each year. ESPN has been broadcasting ACC content since 1979 and owns the exclusive rights to all conference-controlled matches in all sports and championships.

Fort Worth Library Strengthens With Lending Of Video Games